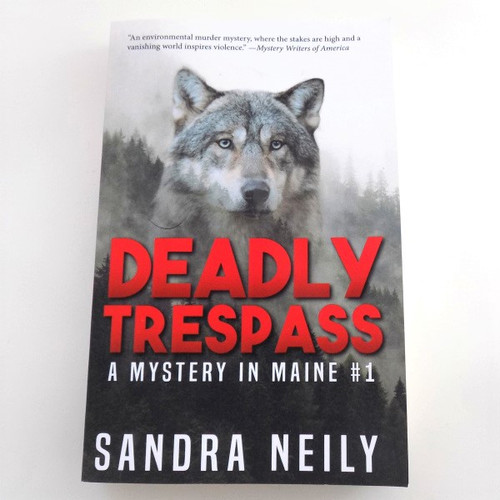 Cassandra Patton Conover is about to become an outlaw. Searching for her wayward dog in Maine’s dense woods, she finds her best friend Shannon crushed under a tree. Then she finds tracks larger than any animal she knows and a mystery only wild animals can help her solve. Before she can absorb the loss of her friend, Patton is hired to guide a surly reporter who suspects extinct wolves have returned to Maine, but the forest has too many agendas. A billionaire hopes wolves will become a save-the-forest strategy. A timber company plans to exterminate the pack. A game warden loyal to his Penobscot tribe, his attraction to Patton, and his law enforcement life, has too many tough choices, and a black ops mercenary rips open Patton’s wounded life so he can aim her at the wolves. When gold wolf eyes issue a challenge at her tent door, Patton is drawn deeper into Shannon’s mysterious murder and the wolves’ fate. To find her friend’s killer, she must find and trust the pack. To save her dog, the wolves, and her own life, she must step outside the law, sacrifice her career, and embrace a wild world.

SANDRA NEILY is the winner of the Mystery Writers of America Helen McCloy award, as well as a finalist for the Women’s Fiction Writers Association’s Rising Star Contest and other recognitions for her fiction. The author/editor of “Valuing the Nature of Maine,” she’s worked as a licensed Maine Guide and whitewater river outfitter. Living next to Moosehead Lake with her husband and rescue dog, she’s fly fishing, skiing, paddling, and “out there,” unless she’s writing people toward the natural world.

“...a rare talent in indie literary fiction, delving into women's issues in a way that rings so true...reminiscent of good contemporary American authors such as Joy Williams, Joanna Scott, and Cheryl Strayed

” SPR “...will propel you across the wildest of Maine’s terrain and into its coldest waters—in search of whispered wolves, possible murderers, odd bedfellows, greedy sons of bitches, and reasons for it all.” FAPA award winning author Meredith Marple

The Brockton Tragedy at Moosehead Lake